Glamping on a farm with fabulous fungi!

Autumn. The season of bold, vibrant colours, smoky aromas drifting on the breeze and leaves crunching as they scatter underfoot. Refreshing winds whip across big skies blowing in clear, crisp air. There’s nothing like a good autumn storm to make you feel alive!

Yet as the nights close in it can feel a little claustrophobic. What can you do when the weather turns, when darkness encroaches? Just how do you keep the kids amused?

Try glamping on a farm; get those wellies on and embrace the season in all its muddy, windy, changeable glory. Get up close and personal with Mother Nature, get in amongst the undergrowth and you might be surprised at what you find.

It’s the best time of year for fungi. The kids will love looking for them and may even learn something. But it’s fun for big kids too…

Not plants, not animals, but a weird and wonderful group of living organisms that can be found in most habitats on Earth. Just look at these beauties:

They mainly feed on dead plants, animals and microbes but some feed off living cells or even kill them for food.

Most fungi are made of two main parts:

Why are fungi important?

They’re an essential part of our ecosystem.

85% of plants depend on fungi for survival. The fungus provides nutrients that the plant’s roots cannot capture (while the plant provides the fungus with sugars). This is called a symbiotic relationship and is mutually beneficial.

Fungi are responsible for decay, along with bacteria. Without them, 100 billion tonnes of dead plant material would accumulate in a year! The terrestrial ecosystem would not function correctly without them. There would be no soil, no garden plants, trees and crops, no herbivores, insects and other pollinators, no carnivores. And no humans!

Where can I find fungi?

Fungi tend to like dark, damp places so try looking under leaf litter, on rotting wood, on tree trunks, in any nooks and crannies. Make sure you look all around, high and low.

I found these brackets sitting resplendently on a dead tree trunk in a shady spot off the Brampton Valley Way. If you get in really close you can often see beautiful patterns and textures on fungi.

These specimens were all growing in East Carlton Park and I didn’t even have to look very hard; just wondering around the sculpture trail revealed them:

And try looking around the site if you’re glamping on a farm. They just keep appearing at Country Bumpkin Yurts.

Basically, if you go out in the Leicestershire and Northamptonshire countryside this autumn and start looking, you will find a fungus!

And on that note, what better way to end your day than by relaxing in a hot tub with a few fungi!! Okay, I mean a glass of wine and some chocolate…

With the kids tucked up in their yurt for the night, sit back, relax under a canopy of stars and reflect on the wonders of fabulous fungi!

Susan is a freelance copywriter based in the East Midlands, UK. When not writing she can often be found enjoying the great outdoors or snuggled up with a good book. Find out how she brings copy to life at www.susanhammond.co.uk, or for more on her outdoor adventures: www.creationlifeadventure.com 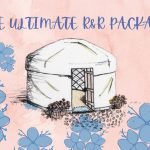 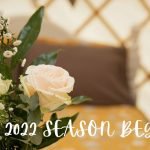 Our 2022 Yurt Glamping Season Has Begun 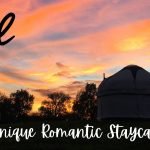